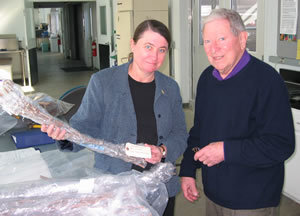 (Paso Robles) - Château de Beaucastel is renowned for using all thirteen permitted Châteauneuf du Pape varietals in their blends, and their wines are rated among the world's finest. Thanks to a recent agreement with the University of California at Davis, Tablas Creek Vineyard, the project co-founded by the Perrins of Château de Beaucastel and long-time importer Robert Haas, will have all thirteen grapes to work with as well.

There are thirteen varietals permitted in the Châteauneuf du Pape appellation in France's Rhone Valley (fourteen, if you count Grenache Noir and Grenache Blanc separately). Tablas Creek Vineyard brought in high quality clones of six of these varietals when they began their project in 1989. These were Grenache, Mourvèdre, Syrah, Counoise, Roussanne, and Grenache Blanc (they also brought in Viognier and Marsanne, which are traditional Côtes du Rhone varietals though not permitted in Châteauneuf du Pape). In 1998, Tablas Creek imported Piquepoul Blanc.

With this week's agreement, the remaining varietals (Cinsaut, Clairette, Terret Noir, Muscardin, Vaccarèse, Bourbelenc, and Picardin) will, on the condition they pass a 2-year indexing process conducted at U.C. Davis, be planted at Tablas Creek Vineyard, and available for growers around the United States through Tablas Creek's association with NovaVine of Sonoma, California.

U.C. Davis is planning to include the new varietals with the seven varietals previously imported as a "Beaucastel Collection" of Châteauneuf du Pape clones. According to Deborah Golino, Director of Foundation Plant Services at U.C. Davis, the varietals arrived in Beltsville, Maryland this week, and are expected at U.C. Davis soon. Golino is "thrilled that Tablas Creek Vineyard is putting these varietals in a public collection."

At Tablas Creek, four acres have been set aside as increase blocks for the varietals when they are released from quarantine. "These are some of the oldest Languedoc and Southern Rhone varieties," says Tablas Creek founder Robert Haas. "They're traditional," he continues, "we don't know what they'll be like here in California. But, we'd like to try them out, as well as to make available these varieties to California viticulture."